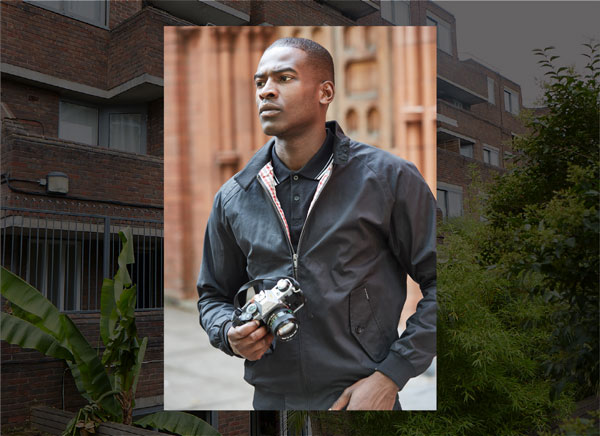 Photographer, DJ & model Chris Reid has a busy schedule. His effortless style is evident both in front of and behind the camera. His unique portrait photography style gets up close and personal with his subjects, exploring and celebrating their quirks and personal style. The Series launches nationwide with an outdoor advertising campaign which is supported by a strategic social media campaign and features iconic products from the Autumn/Winter 2019 collection available for purchase in-store and online now.

How did you get into photography?


I first got into photography working in retail at Currys PC world. I worked on many departments within the store, but when I specifically worked on the camera section, I started to develop a genuine curiosity about cameras and a burning desire to take photos. Which led me to purchasing a Canon 650D with a 50mm 1.8 lens.


When I got signed as a model in 2015, it pretty much took over my life, so photography became stagnant. As I developed a more grounded routine with modelling, I started shooting again. I purchased a Nikon point and shoot film camera from a charity shop in 2017 - and that’s what sparked my first interest in film photography.


A milestone for me would be my first published shoot as a photographer - an online editorial for Hunger magazine. It was a shoot with just me and a model; no stylist, no MUA. The vision was pretty much all hers, and this was something I wanted to achieve, giving models more voice on the creative side of shoots. I was super grateful to be published from the other side of the lens and, at the same time, allow a model to express a personal creative idea.


Tell us about your style of image making.


Being a model as well as photographer, I didn’t want to fall into fashion photography solely. I like to get up close and personal to the subject, and try to pull a story from out of their eyes. I also like to document a lot when I travel. I recently did a series in Jamaica called ‘faces of Lucea’, which was a portrait series on people who lived in a town where my mother grew up. I pick subjects off intuition, or what story I’m trying to portray. 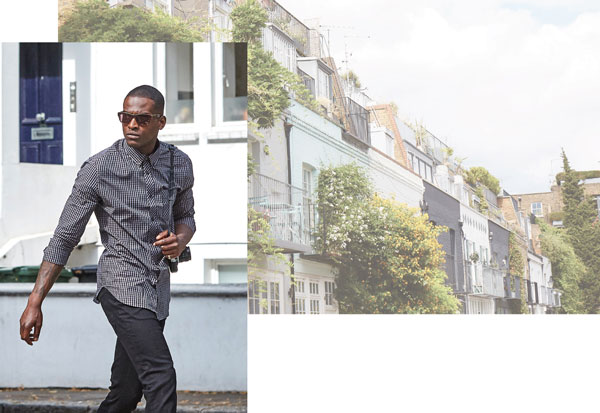 How relevant is film photography today? What does film photo give you that digital doesn’t?


I love film because I feel it captures the energy in a way that digital can’t. I noticed that the more projects I shot on film, the more I was enjoying the freedom that came with not instantaneously having the work displayed. It kept me and my subject totally present, and always adds a sense of mystery. It means the shots become much more valuable, along with the time we spend shooting a reel. The mechanical aspects of a classic film camera, and the shot it produces – that is what society is looking to hold onto in this forever progressive, futuristic life.


What cameras are you using at the moment, and where are you processing your photos?


I’m currently using a Canon Ae1 I got for £50 off gumtree two years ago, a Canon Eos 650 camera I got that for £11 off eBay, and a point & shoot Canon XL zoom from a charity shop. I think it was £15. I GET my film processed at snappy snaps and sometimes Artful Dodgers Imaging, depending on what I’ve shot - but I scan my images myself on a Epsom v850.


Any exciting projects coming up this year we can know about?


I’ve just finished an amazing project for K Swiss called ‘Klass of 19’, a series of shoots with different creatives based around London. I think it comes out in October. I’m also working on an ongoing project called from ‘the models eye’, which is basically me shooting behind the scenes photos of models on set at my personal modelling shoots.


Who is your biggest influence in the photography world?


The likes of Bruce Gilden, Chimodu, Richard Avedon, William Klein, Daniel Arnold, Franklyn Rodgers – they have definitely influenced my work. However, I would honestly have to say I’m my own biggest influence, as I believe everything you do is a manifestation of what you’ve done and want to do.


How did you get into modelling?


I first started about 2013 -just modelling for friends brands in my home town of Wolverhampton. Doing tests shoots with photographers in local areas, like Birmingham. There wasn’t much of a fashion buzz in the Midlands at the time, and not many modelling agencies. 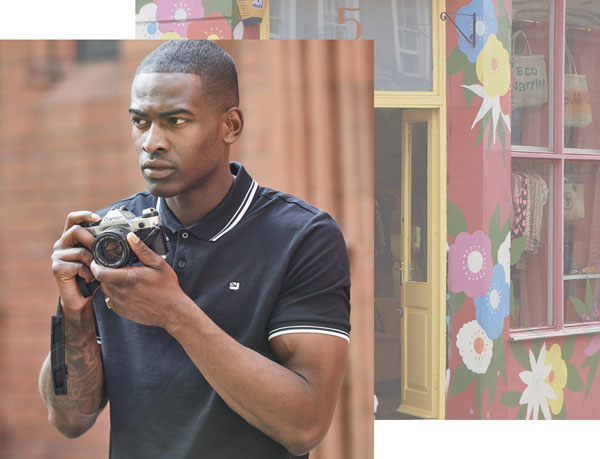 I applied for an agency called Alan Sharman, which was the only real established agency I knew of, but they didn’t sign me. So I started networking online, and coming to London now and again. I ended up talking to Paul, the owner of Nevs, about coming down to London and seeing him and the bookers. After a few months of speaking to Paul and coming to London, they signed me. They advised moving to London, if possible, was the best option, as it would open more flow of work and would be easier for castings etc. So I moved to London in 2016. I also recently signed to J’Adore in Manchester last year.


What does Ben Sherman mean to you?


Ben Sherman makes me think of a classic British Brand. A brand with a rich heritage in the British fashion scene and one that resonates with so many people of all backgrounds.


What is your favourite piece of Ben Sherman clothing and why?


My favourite piece would probably be the sand corduroy jacket. I wear a lot of clothes with similar tones so it fits my style perfectly.


How would you describe your style, what are key pieces you can’t live without?


My style is pretty much whatever I feel like wearing at the time. A pair of black tracksuit bottoms, black tee shirt, a tactical vest jacket and a pair of shades are the essentials.